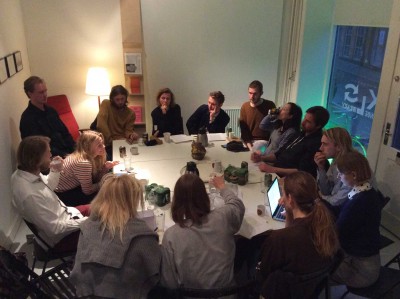 "It started out as a fascination of what I call the ultimate form. Shiny, round, hard, and heavy – it was amazingly pretty.
I chose to carve this form in marble, which sent me back to Ancient Greece and all the handsome, white, naked male bodies (beautiful, naked female bodies were no- where to be seen).
Since the form I was carving was a kettlebell, an object used to create an ideal body, I began to understand why this form is ideal too: The body, which this form represents, is a well discussed and well distributed body, and the connection to this ideal body verifies the form itself.

So instead of carving a human body in marble, the way Myron did, I carved the form that created it. This lead me to the idea to sculpt the Ancient, male ideal Discobolus - The Discus-Thrower using my own body as a sculptural material. My new body sculpting idea was somehow utopian, since it is complexed to create a male body ideal using the body of a female. But this was a sweet dilemma, because to me the whole idea of an ideal is utopian too. One sovereign ideal? It cannot and does not exist; at least I do not believe it to be so. I mean, even in Ancient Greece photoshop- ping was a thing – to create the superior ideal, Discobolus, several different men where used as posing models. This guy is not really real!"